If I had to pick one style of food to live on for the rest of my life, it would be Italian. Whether it’s a red sauce dish or Ossobuco, Italian food never fails to provide flavor and comfort. Despite my love for Italian food, I’ve never travelled to Italy to experience the country’s culture and cuisine. So this past month, Lisa and I took the trip we’ve always talked about and traveled throughout Northern Italy.

Neither Lisa nor I studied abroad in college, so this trip would be our first to Europe. Though we wanted to see all of the major cities of Italy, we didn’t want to be travelling every day. We decided to limit our travel to Florence, Venice, Milan, and combined staying in the major cities with three days in the Tuscan countryside. The result was a perfect blend of Italian art, culture and food.

A view of the Duomo from the Boboli Gardens

Our first stop was to spend three nights in Florence, the home of the Renaissance. We rented an apartment in the residential area of Oltrarno, which was within walking distance of great restaurants and historical sites. We spent our first day walking the Boboli gardens at the top of the city, which offered  scenic views of the Duomo, the famous cathedral built in the 13-1400s. On our second day we visited the Uffizi gallery, which housed some of the best Renaissance art from DiVinci, Michelangelo and Raffael.

After two days of walking around Florence, we decided to hike to the small hill town of Fiesole. Fiesole was a needed break from the crowded streets of Florence. We had a fantastic lunch at Aurora Ristorante, a small café that had hilltop seating overlooking the Florentine countryside. 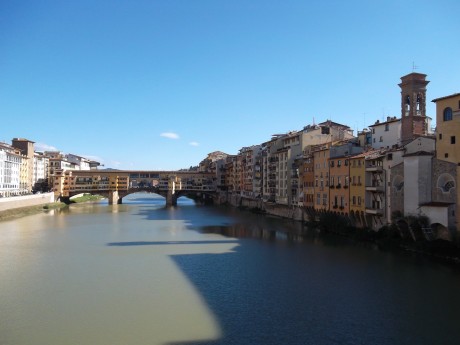 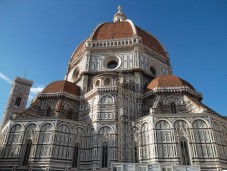 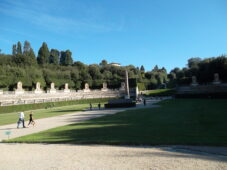 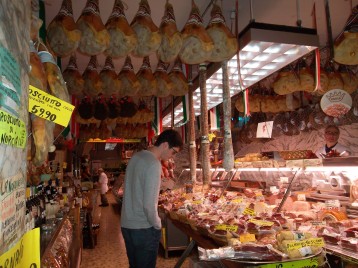 A Macelleria (butcher shop) in Florence. Macellerias in Florence were like Starbucks in New York City: they was one on every block. 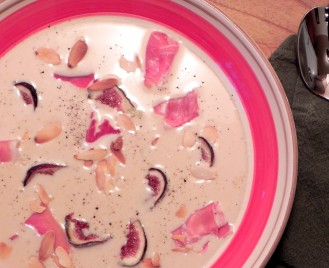 As for the food, Florence is best known for its gelato, which was delicious. Our best meal came at Il Santo Bevitore, one of the more refined restaurants in Florence. The menu was innovative with dishes such as burrata stuffed cannelloni, and warm almond soup with figs and Parma ham. 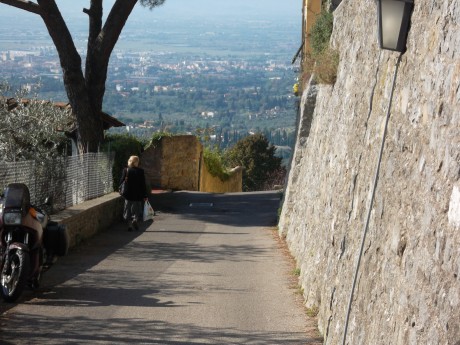 Walking down the road in the hilltown of Fiesoloe outside of Florence. 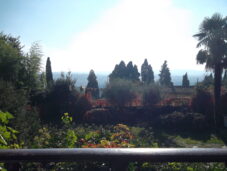 A view from Ristorante Aurora in Fiesole, just outside of Florence. 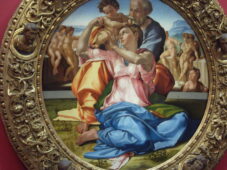 Doni Tondo (The Holy Family) by Michaelangelo, on display in the Uffizi. 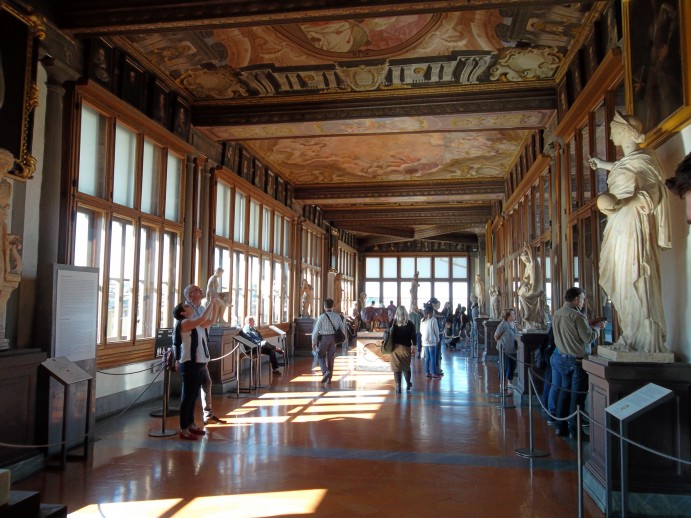 Walking the Halls of the Ufizzi Gallery in Florence.

After dinner, we walked over to the Piazza Piti to have a glass of wine at Enoteca Pitti Gola e Cantina. The wine bar had a relaxed atmosphere with marble counters, bookshelves lined with Tuscan reds and jazz music playing in the background. 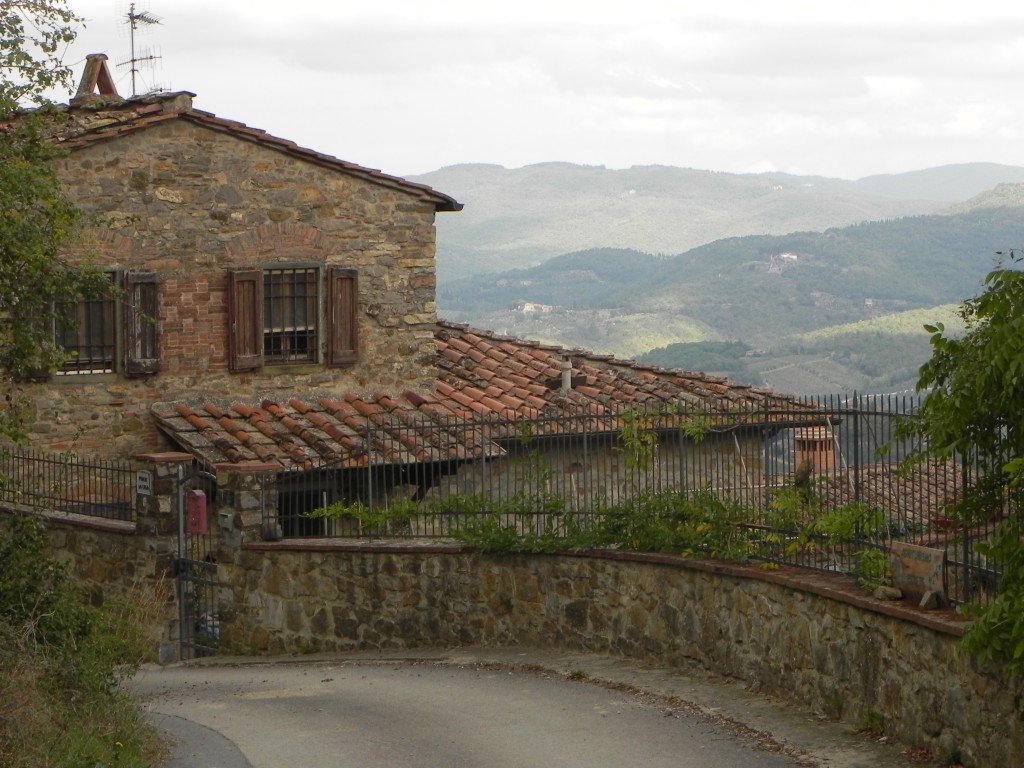 From Florence we were able to take a bus down to Greve in Chianti where we planned to stay at Patrizia Falciani, an agriturismo on the outskirts of town. For those not familiar with an agriturismo, it is a farm-style bed and breakfast. 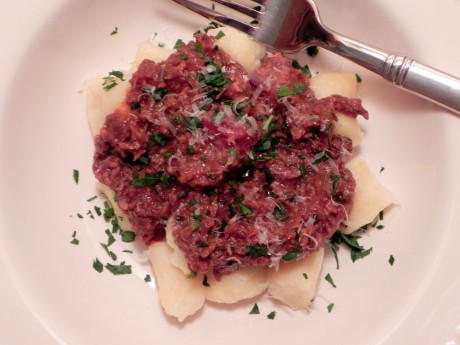 A view from our balcony at Patrizia Falciani 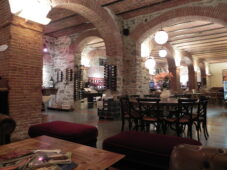 We tasted wine at “La Cantine,” a wine cellar Greve in Chianti 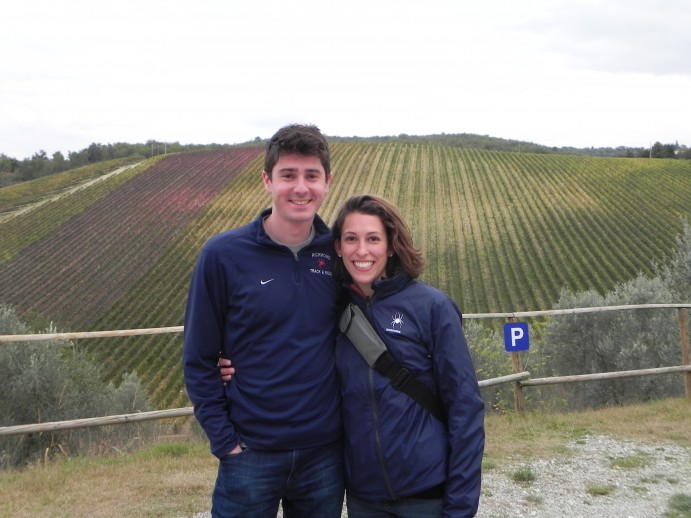 Our plan for Tuscany was to rent bicycles and bike throughout the small hill towns. Those plans quickly diminished when we began our 1.5 mile walk up the mountain to arrive at our agriturismo. I underestimated how mountainous Chianti would be! Luckily, we were able to adjust our plans and rent a scooter at Ramuzzi, a bike rental shop in Greve. This decision worked out perfectly. We drove down to the Florentine rival city, Siena, and along the way visited the towns of Castellina and Panzano. Since it was the tail end of the busy season, the Tuscan towns were quiet and at times we felt as if we were the only people on the road.

As for our favorite meal in Tuscany, it came at Montagliari, a vineyard in Panzano in Chianti. After a day of scootering around Tuscany in 50 degree weather, we were looking for a warm atmosphere for dinner. Montagliari did the trick with its Stone Farmhouse restaurant and huge fireplace. 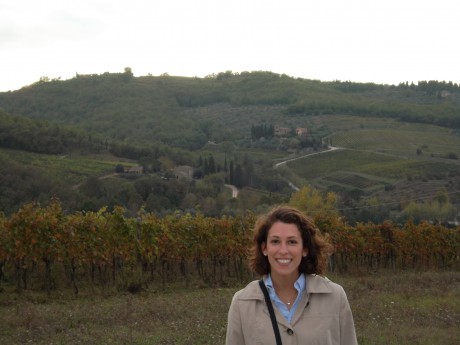 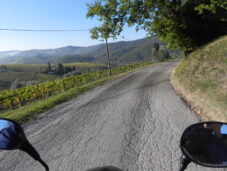 Driving from our agristurismo down the mountain into town. 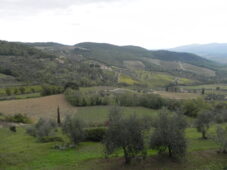 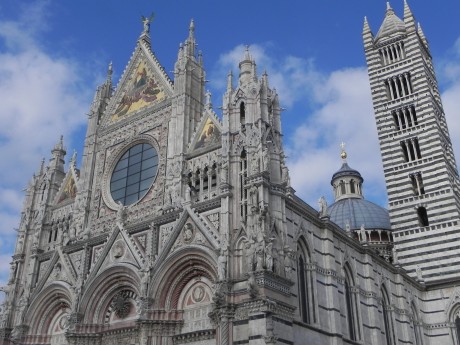 A view of the Siena Cathedral 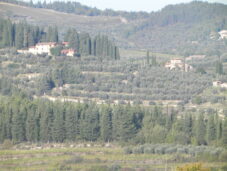 The countryside of Tuscany was amazing. Cypress Trees and Vineyards were carved into every mountainside. 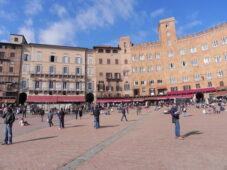 The Piazza in Siena was one of the coolest in Italy. Twice each summer, a bare-backed horse race takes place in the piazza.

What made the meal special was being one of two tables seated at the restaurant that evening. The other table was a local Italian family celebrating their daughter’s college graduation. It was a glimpse into Tuscan culture and how seriously they take eating. They started their night with a selection of cured meats and cheeses, followed by two separate pasta dishes, Florentine steak for the main course and dessert to cap the night. Meanwhile, Lisa and I each had a pasta dish and split a Tuscan apple tart with gelato for dessert. 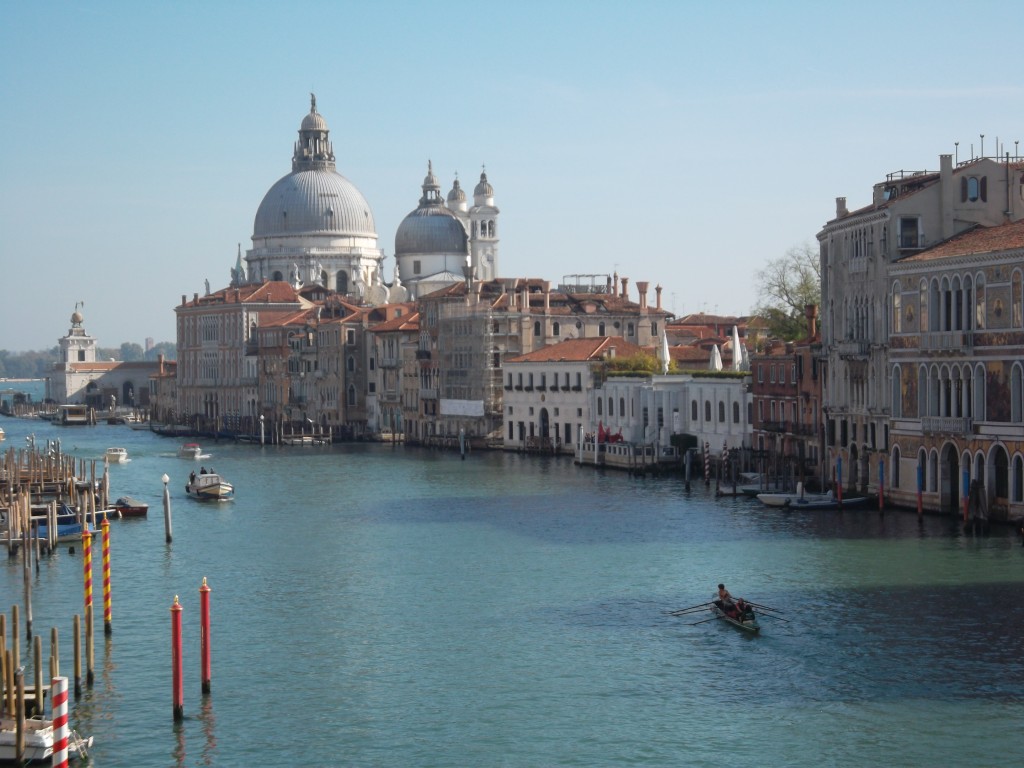 After six nights in Florence and Chianti, we traveled to Venice for two nights in San Marco Square, one of the most well-known piazzas in Italy. As we took the Vaporetto down the Grand Canal, we were in awe of the architecture and design of this city. The beauty of Venice exceeded our expectations, though I will say the food was disappointing. After doing research on Italian food after our trip, this shouldn’t have been a surprise. According to food experts in Italy, the more beautiful an Italian city is, the less you can expect of its food. 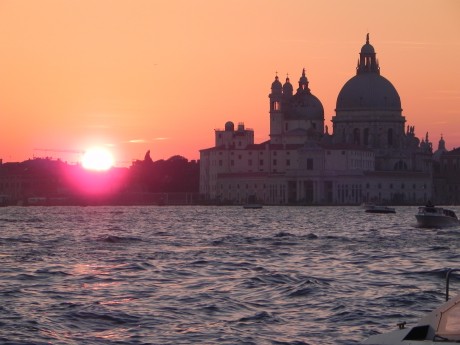 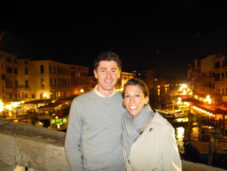 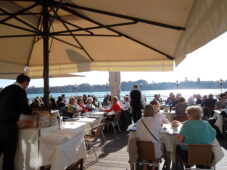 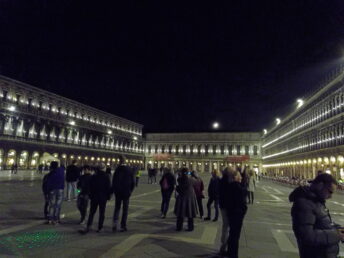 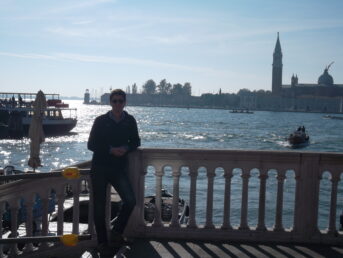 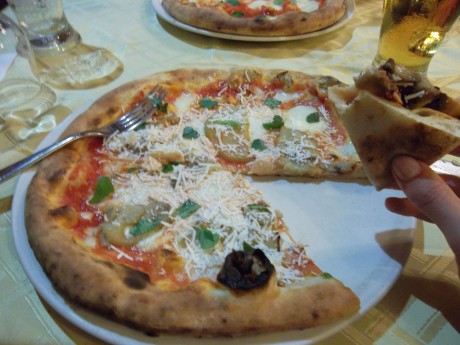 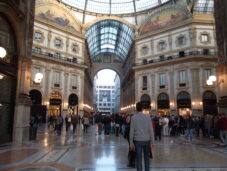 From Venice, we went to Milan for one final night. Milan was where we had the best meal of our trip and perhaps the best pizza of our life. The restaurant was Pizzerie Maruzzella. Its location was a surprise to say the least, located next to a McDonalds outside of the tourist area. But when we walked in the door, we felt a true sense of Italian culture. The wood-burning oven was located at the front of the restaurant, allowing us to see the pizza being made and converse with the chef as we waited for a table. The setting was what every restaurant in Little Italy, New York, aspires to be, with wood-paneled walls and black and white photos of Milan and Italian family members. The pizza had the perfectly soft and chewy crust with a slight char from the oven, fresh tomatoes and buffalo mozzarella.

Our trip to Italy was unforgettable, and the scenery and history I’m sure is some of the best in the world. But despite all the hype about the food, I expected the restaurants to be better. Yes, we had some great meals, but if I would compare the best Italian restaurants that we visited with some of our favorites in New York City, there would be no contest. I realize that the best Italian food is often found outside the big cities of Italy. But for first-time travelers to the country, taking a detour to a prestigious food town such as Alba in the Piedmont region wasn’t at the top of our list.

In America, our restaurateurs and chefs are some of the most innovative and competitive in the world. They open restaurants in metropolitan areas such as New York and San Francisco where people from all over the world have a chance to try their cuisine. This allows travelers to experience the best food our country has to offer along with visiting the tourism and historical sites.

Also, restaurants in Italy didn’t seem to be as customer-oriented as their American counterparts. For example, many restaurants in Italy wouldn’t serve lunch after 2 p.m. We went into a market in Siena at 2:15 p.m. one day to order a panini, and we were turned away since they were finished making lunch for the day. This is partially a cultural difference in the way of life, but considering these historic cities are so reliant on tourism, why not think more about what their customers’ prefer?

I realize that I only spent nine days in a few area of Italy and these observations are based on my first impressions. But in America, first impressions are sometimes all we have. So now that I am back in the states, I look forward to dining at American restaurants where innovation continues to push what we eat to new levels of deliciousness.

For those who have traveled to Italy or other areas of Europe, I’d love to hear your thoughts on the topic. Perhaps I missed a restaurant in one of these cities that has exceptional food. Either way, I look forward to your feedback.

Recipes From Our Trip